Many utility companies face the challenge of meeting critical security and compliance requirements within a large and complex IT/OT infrastructure. Proactive monitoring of hardware and software is highly important in maintaining an uninterrupted flow of power to customers. The real-time monitoring and alerting capabilities of IT/OT devices can be an effective tool in managing these complex systems. One particular, large US utility initiated a complete systems overhaul, and selected ConsoleWorks to centrally manage, monitor, and secure their large infrastructure.

The utility was able to effectively monitor and manage their entire infrastructure, and additionally program alert warnings to page designated support teams when an event required immediate attention. This proactive monitoring allowed personnel to address events in the system before they developed into crises.

The result was dramatic improvements in efficiency by centralizing event reporting and logging, which subsequently contributed to improved NERC regulatory compliance. This goes to show that many companies use ConsoleWorks to target a specific issue, but there are additional capabilities and advantages which can also be extremely valuable.

Are you maximizing all the features and benefits of ConsoleWorks?

Let’s face it – Maintaining a large, complex IT/OT infrastructure can quickly become a drain on any company’s resources. This is especially true when it comes to Grid Operations for energy providers, whose critical systems must be closely monitored to maintain an uninterrupted flow of energy to customers. The good news is that utility providers can leverage the ConsoleWorks Cybersecurity Operations Platform to manage their infrastructure in a very efficient way.

One of the largest energy providers in the western United States needed a solution that could monitor and manage all of their hardware and software systems, old and new, and provide remote access to servers located in multiple states. ConsoleWorks manages their entire EMS system from a single screen, virtually eliminating the need to staff remote sites. They are also able to improve the efficiency of personnel by automating many of the daily functions which were previously performed manually.

Do you have a challenge? We can help!

NERC-CIP compliance is an integral part of the conversation in the Utility industry. Management practices are being continually refined and deployed against it, technology is being implemented because of it, and gaps identified by NERC-CIP audit experiences are driving compliance efforts. Many Utility companies have successfully reached the stage where they can confidently state that they are NERC-CIP compliant. But what does that mean?

First let’s review the difference between audit and intent. An audit is a review process intended to determine if appropriate policies, procedures, and controls are in place as defined by the NERC-CIP compliance regulations. Each Utility company approaches these elements of compliance in their own way because the regulations are a guide, not a prescription.

Intent is a different story all together. We can pass our audits, we can rightfully claim we are NERC-CIP compliant, but that does not mean we are meeting the intent of the NERC-CIP regulations. The intent is that we are supposed to protect our vital electrical power infrastructure so that we all have the electricity we always need and that we have the mechanisms in place to stop potentially disruptive events from occurring. Intent covers both service loss and exposure to service loss. For example, losing generation capability due to generation systems being compromised is a service loss, and a clear NERC-CIP violation. Allowing a security risk to occur that makes the generation system vulnerable to exploitation is also a clear NERC-CIP violation. Both compromise the intent of NERC-CIP. Both cases, should either occur, would take a company that can rightfully claim to be NERC-CIP compliant into being out-of-compliance.

For example, let’s say we have strong physical security in place at a given location where a Cyber Asset exists. There could be a building that has a locked door or a fence with a locked gate. There could also be a cabinet or interlock device that has another lock on it, to ensure only those authorized to access that Cyber Asset can do so. These examples would meet NERC-CIP requirements from an audit perspective and the claim of being NERC-CIP compliant in many cases.

But what if the authorized person who accesses the Cyber Asset fails to follow the procedure for changing, configuring, updating, patching, modifying, etc. the Cyber Asset? What is done could directly lead to a service loss but more likely it would create a threat or vulnerability that we simply do not know about (until something bad happens). Transparency and oversight depend on knowing what each person who touches a Cyber Asset does to it. A procedure for getting approval for, and documenting, all changes will satisfy auditors but any exceptions or deviations from the procedure are a violation of the NERC-CIP and compromise its intent.

The challenge for many Utility companies is now focused on ways to gain oversight and control over NERC-CIP policies. We all know that procedures that people must follow will result in exceptions and errors sooner or later.
So while many Utility companies have solved the challenge of being NERC-CIP compliant, the NERC-CIP challenge has only begun to be addressed. The focus is shifting now to looking for ways to move policies into systems for oversight, simplification, elimination of human error, and proactive response to potential threats. 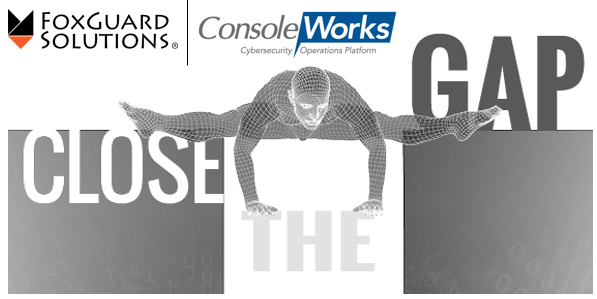 The new product offering for patch gap and update management, being marketed by FoxGuard Solutions is a result of a multi-year project and a $4.3 million Cooperative Agreement awarded in 2013 from the U.S. Department of Energy’s Cybersecurity for Energy Delivery Systems (CEDS) division.

FoxGuard Solutions leveraged the ConsoleWorks Platform along with their own technologies to develop a solution to help companies identify and mitigate gaps in the security of their systems for IT & OT assets.

The ConsoleWorks Platform can determine the current patch level across all assets. FoxGuard extended the capability to determine which patches are security related and the priority level. By analyzing the relationships between packages, updates, and dependencies, FoxGuard’s Patch Gap product can lay out the shortest, most secure, and safest path for a cyber asset.

ConsoleWorks takes the results generated by FoxGuard and produces simplified yet comprehensive dashboards and associated reports of the current patch situation – across all assets. The simplified view enables companies to assess risk according to their management policies and adhere to compliance and security priorities.

FoxGuard Solutions was tasked with researching, developing, and demonstrating technology and techniques to identify and verify the integrity of updates and patches for energy delivery systems software, hardware and firmware, while also facilitating the deployment of those updates.

The Patch and Update Management Program simplifies the process of understanding what patches are available for energy delivery industrial control system devices for both end users and equipment vendors, while also simplifying the ability for a utility to adhere to NERC CIP v6 requirements involving patching, ultimately leading to a safer grid. Read press release.